It was late into the 1800's of the Imperial age and Alynae Helviar was hiding ion the outskirts of the vast Yaralti city of Karanlik Taraf.  The city had been here for thousands upon thousands of years, ever since the Night Mother brought the Yaralti people away from the foul Ustun leader Kräl Şah Yilmazok Akar. They have lived in peace and tranquillity, hidden from all other creatures in Fera's Underground.

The young girl was a mistake, an Arizali. A defect.

Born blind, she should have been strangled at birth with her very own cord, that was what should have happened. Her parents had been out of town when the birth happened and had given birth in one of the many off shoot caves surround the city; out here there had been no Gene-Inspectors to end her life.

That day had been 16 years ago and now the girl was a thriving teenager; although hidden from the rest of her people, she enjoyed her life with her family. Sure the caves were dangerous and her parents kept a short leash on her; she had slowly been learning her aetherial arts thanks to her mothers teachings.

The day that her life was turned upside down had come and gone so fast she did not know what happened. All she knew was that she had lost her mother and father; were they dead or were they alive? She did not know.

All that she knew was that she had been taken by these.... 'umans' what ever her father had called them.

It had been days and she was exhausted, cold and afraid; the fear of the unknown had set in imedietly but it had sort of faded a little now.

It did not stop the girl from being scared; these foul smelling and foul-speaking things did unspeakable things to her. Things she was glad she could not see and yet could still feel them even when they finished with her for the night.

Unknown to the girl, the men had came upon a tavern on the road heading north to Tousir, they had left her in the cage, a cage no bigger than her actual body and leaving her sat down and cramped. A thick blanket thrown over the top slightly revealed her to the world.

The pale white skin hinted with a blue-purple. The long ears, red eyes and white hair. She was an unknown, nothing anyone had ever seen before on the surface. The Yaralti were unknown and only by accident had these bandits and slavers come into possession of the girl. Inside they partied away, drinking and feasting; leaving the poor girl outside in the cold of winter.

Alynae was rescued by a travelling bard named "Shadow". Breaking into the cage after putting the bandits to sleep thanks to his skill in poisons; the bard took the frigtened and blind Alynae in to the tavern. He washed her up and fed her, giving some of his clothes for her to wear.

However not was all that it seemed. Shadow had some not so fine intentions for the girl. First was the murder of the people who did this to her. Using some of his magic, he modified her memory and made her believe that revenge was what she wanted, even though it was against her belief to The Night Mother. After that they proceeded to one of Shadow's hideouts.

Deep in the mountain forests of Adestein's South region, they arrived at The Burrow, an old fortress left over from The Principality Wars. Here Alynae began to learn several new tricks; travelling and navigating here on the surface, hunting, thievery and love.

She fell in love with her new protector. The blind girl had never loved anyone like this and he seemed to love her too. They shared her first time together and continued their relationship and tutelage. 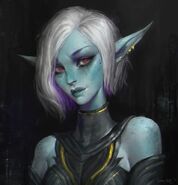 Fan Art by @devilishmidboss on Twitter
Add a photo to this gallery
Retrieved from "https://fera-world.fandom.com/wiki/Alynae_Helviar?oldid=944"
Community content is available under CC-BY-SA unless otherwise noted.